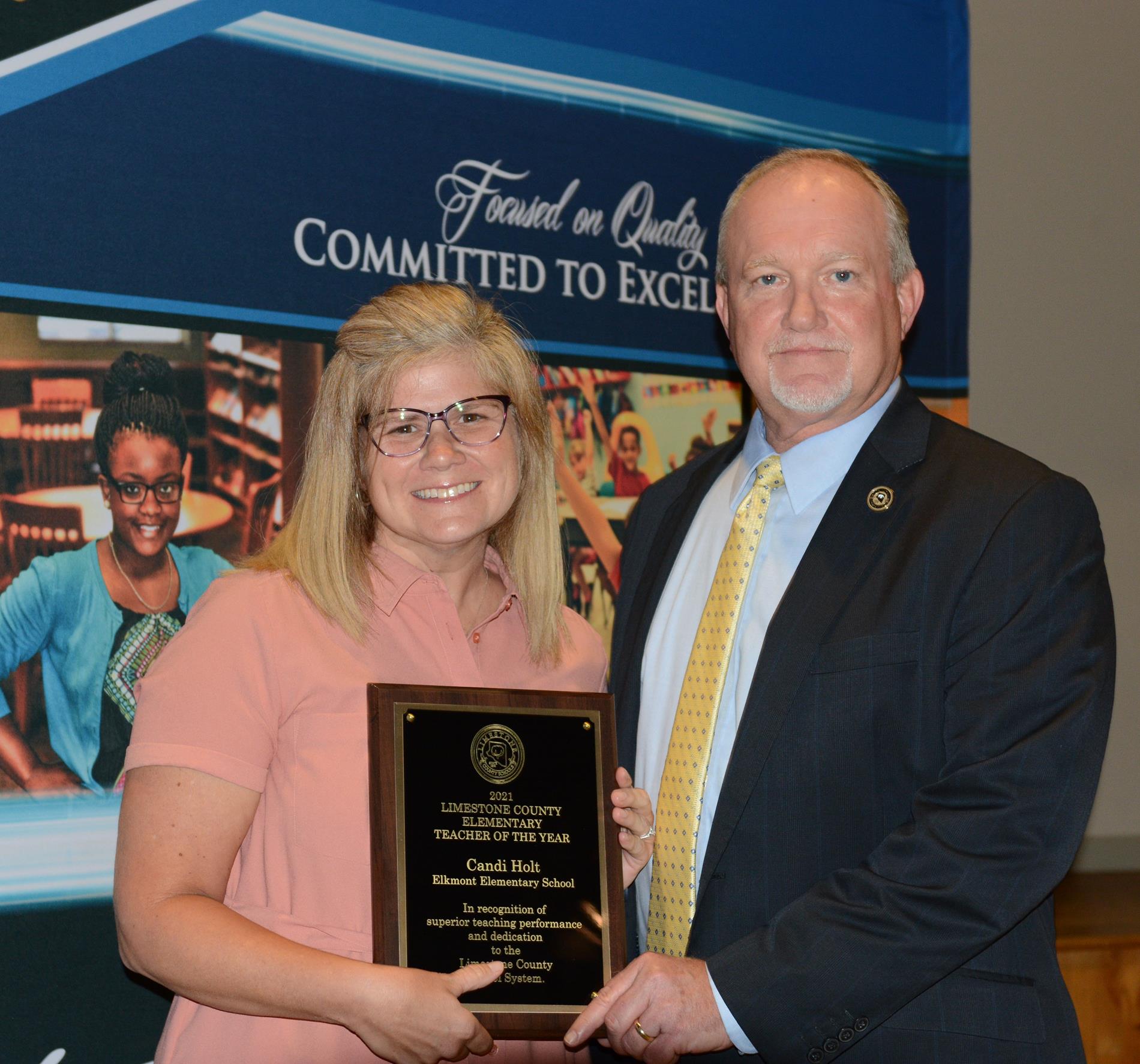 ELKMONT — As the end of the school year approached, Elkmont Elementary teacher Candilyn "Candi" Holt assigned her fifth grade students to write about their favorite memory from elementary school. Many of her students wrote about the songs and dances that she often breaks into during her teaching.

Lyrics like "get low" and "to the right, to the right" allow Holt to relate songs that her students are familiar with to math topics like equivalent fractions and place value. She said the songs help the material stick in the kids' minds by connecting it to things they enjoy.

"It's all about establishing good relationships with kids," said Holt, a 22-year teaching veteran. "You are a friend to them, but you're also there to help them learn."

Holt's creative teaching methods and her dedication, including working in the after-school program until 6 p.m. daily, helped earn her selection this month as District VIII elementary teacher of the year.

"She goes way beyond the rest of us to give her students what they need," fellow teacher Kriston Cagle said.

The district honor made Holt one of 16 finalists for state teacher of the year, which the Alabama State Board of Education said could be announced in August.

“I love what I do so I'm glad that I'm recognized for what I do for the kids, because it’s all about them,” Holt said.

She describes her class motto — “Never settle for less than the best” — as a way to make her students understand that everyone makes mistakes. All she asks is that they do their best.

“You can do it if you give everything you have,” Holt said.

She said that listening to each child and their individual needs is her secret to success.

“Just listen to them, be there for them; slow down and really get to know the kids,” Holt said.

Checking on each child

One way she builds these relationships is by having a private chat with each of her students in the morning. She plays their class song, a clean remix of "Good Day" by Nappy Roots, and goes around to each child to check in on them.

"She's always there for us if something is going on at home," said one of Holt's students, Lena Simpson.

Holt believes that learning should be based on curiosity and that her job is to act as a facilitator for learning by adapting to students’ needs and providing feedback.

"Mrs. Holt strives to cultivate lasting relationships with her students and a 'can do' attitude among all," Limestone County Superintendent Randy Shearouse said.

One of the ways Holt has found to do this is by incorporating the students' interests into her classroom. This year, her class loved the game "Among Us," so Holt assigned one student to be an "imposter" each day as a way to encourage good behavior. If the "imposter" was good all day, Holt would reveal who the "imposter" was. If not, it would remain a secret for that day.

"I try to just make it fun for them," Holt said.

With the help of cooperative work, songs and hands-on activities, Holt said she tries to foster a loud classroom full of learning and discussion.

While she loves to have fun in the classroom, Holt said she is often the first one at school and the last to leave. With two adult children, Holt used time provided by her empty nest to help even more kids by volunteering to work for the after-school program. Five days a week, Holt works until 6 p.m.

The program not only provides a place to stay for kids with working parents but allows them to receive extra help and encouragement from teachers like Holt. She primarily assists the kids with their math and reading goals.

Her dedication is evident to the school's first-year principal.

“I watch her inspire kids, build relationships with them, and work with kids to fill learning gaps,” Elkmont Elementary Principal Larry Saulsberry said.

Saulsberry said he can count on Holt to be a leader and go above and beyond in everything she does.

Holt has served as scholars bowl coach for 13 years and the lead teacher for 21st Century Community Learning Center for the past four years. She also established the Robotics Club, which recently competed for the first time and received a grant to build and code robots.

Whoever is selected Alabama state teacher of the year will be tasked with representing educators across Alabama and presenting workshops to various groups. The winner will also be a candidate for National Teacher of the Year.

When Holt was asked why she believes she was nominated, her response was simple.

“It’s just the love I have for this place,” Holt said.