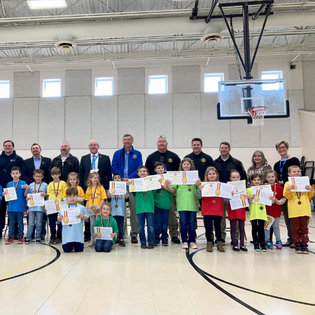 January 20 started as just another school day for Tracy Hodges and her first grade students at Cedar Hill Elementary School. Little did the students know they would later be deemed heroes.

Hodges was in the middle of teaching a small group lesson that morning when she suddenly became unconscious and unresponsive. The students in her class realized she was in need of medical attention and immediately sprang into action.

“On that day, they were courageous, demonstrated their strength and bravery, and now have a real story to tell,” Hodges said.

Hodges later discovered that she had suffered a seizure that was brought on by COVID-19. Today, she is well and back teaching because of her student’s quick thinking.

“God put me in their little hands that day and they took action to help me,” Hodges said. “It’s only fitting they’re being recognized.”

For their heroic efforts, the students were recognized during a special ceremony with family and classmates Wednesday morning. Limestone County Schools Superintendent Dr. Randy Shearouse presented them Superintendent Commendation certificates.

“Our mission as educators is to have faith in our young people.” Shearouse said. “It doesn’t matter what age; they’re our future. This is a prime example of why we have faith in them, and we certainly appreciate and are proud of the way these students handled the situation here at Cedar Hill.”

“ There were many heroes that day,” said Cedar Hill Elementary School Principal Glenn Garner. “Everyone stepped up that day because that’s what heroes do, but none so more than you. Hodges Heroes, that’s the class I know.”